How we define ourselves depends particularly on people around. We shape our self-image and self-confidence according to our relationships with them. However social experience is not always positive. Stigmas and labels given by others can influence our self-estimation radically. How prejudices can affect us and what can we do against?

Stigma comes from the Greek language means physical denunciation. In the middle age they used to burn it onto people’s body who lost honour and it was the indelible sign of shame. In psychology they are those characteristics which cause the feeling of shame and the person who has it is excluded (or believes being excluded) from the society. 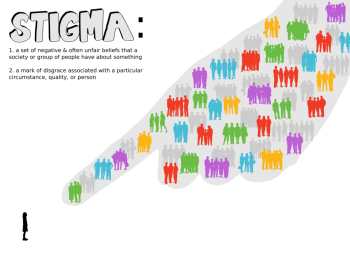 I stigmatize so I am

Every characteristics which are different from others can be a reason for stigmatizing. The reason of exclusion can be internal or external differences like physical defect, skin colour, sexual extravagancy but also a mental illness, homosexuality or addiction as well. So the person is “different”. Why is it so difficult to accept if somebody or something is different? But nobody can be perfectly ordinary, anybody can get into a company where doesn’t fit perfectly to its norms and becoming a target of prejudice. Actually everything starts with categorization. Prejudices are in the background of the basic process which leads to stigmatization. Behind prejudices there is a stereotypical mindset which attach typical characteristics and emotions to groups. Very important to highlight that even if somebody is using stereotypes that doesn’t mean that person is malicious. Our prejudices are kind of a secondary product of how we try to understand the world. We meet a lot of people day by day and we don’t have time to get to know every each of them profoundly. Those people who seem the same we reckon them among one group to find our way in the social world and we see all of those people alike in the group. However if we put all of the people into boxes made by our stereotypes, we don’t get to know them. We create “we” and “others” categories where we believe the “we” is preferable without being aware of it. Often when we raisethe value of “we” in parallel with it we underrate the “others”. The other disadvantage of using stereotypes is they are not reliable and accurate (subjective-generalization) even if they make easier to sense the system of the world. The characteristic of a group doesn’t hint the characteristic of a person. For instance, not all of the homeless people are alcoholic and not all of the overweight people are weak etc.

The harmful effects of stigmatization can affect the self-esteem on two ways. One way is when the person experiences and recognizes those negative assessments coming from others. On the other way those negative comments appear in the person’s mind as well what with subconsciously identifying himself/herself on some level and by this means stigmatization has an active role in the development of the identity.

As an outcome of all these effects the stigmatized role become visible in the behaviour, like a self-fulfilling prophecy and the person will act more and more as the others expect to do. If somebody gets a “label” often enough, step by step starts to define himself/herself according to it. Become one with it and adjusts the own self to the attached expectation of those labels. The social exclusion connected to stigmatization can cause even more damage. If somebody experienced continuous refusal/rejection or threat from the environment, he/she would avoid social interactions. At the same time the social exclusion can cause similar course of nervous system as the physical pain. Can cause the feeling of loneliness, lost control and anxiety.

What can we do?

If the stigma became one with the identity we underrate ourselves. Often in these cases the need to belong gets activated in the excluded person and depends on the environment mainly if she/he can re-fit again successfully. Important to focus on those things in which the excluded person is talented or good and highlighting positive characteristics. With this mindset the excluded person can turn the others’ focus onto the own personality, the positive side (which everybody has) removing from the stigma. Very important here when this excluded person gets into a group continuously monitors in what she/he is different from the others and doesn’t even think, there are things (surely) in which she/he can be similar to them. If the stigmatized person could have experienced that she/he has the control on his/her own life and working on knowing better himself/herself, she/he could be less defenceless to others’ opinions.